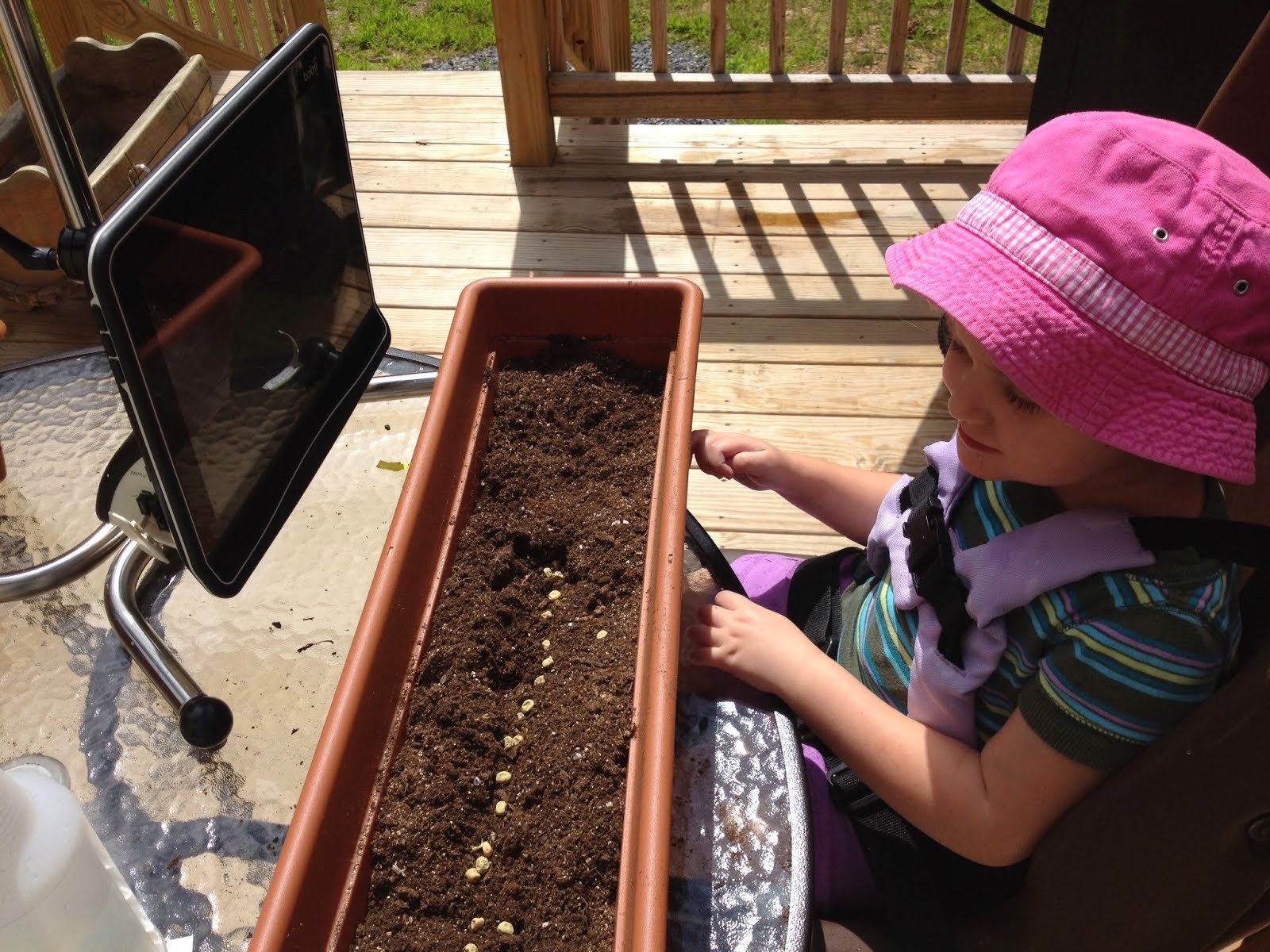 In the spring, a sweet lady named Courtney befriended me after seeing a picture of Lucy on the Great Bike Giveaway page. Courtney jokingly says she "stalked" me after falling in love with Lucy's picture. It turns out she also has a daughter named Lucy, but her Lucy has Angelman's Syndrome. Courtney found me via my blog and we became Facebook friends. She then invited me to join a group on FB that is centered around teaching literacy to children with Angelman's. Angelman's and Rett have many similarities, and so the group has been extremely beneficial to me. What is especially fantastic about this group of people is their optimism and their belief in their children, and their belief in all children with disabilities, to learn!

So, one concept I had never heard of before is something called an "alternative pencil". This is any method of writing that doesn't necessarily use an actual pencil. People use paper flip charts, eye gaze boards, keyboards, alphabet charts on their communication devices...you get the idea. I guess I hadn't thought yet about how Lucy was going to learn to write, but I often think of when the day will come that she can just type out what she wants to say and will not need to use pictures to communicate.

Within Lucy's paper PODD book she has alphabet pages she can use. 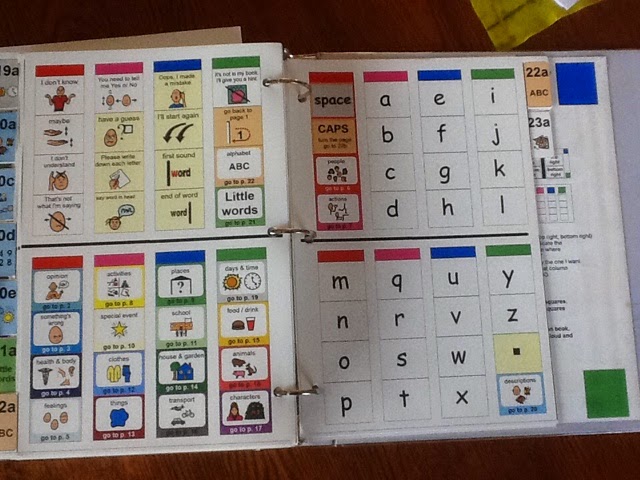 In her PODD that uses the Grid2 software on her Tobii, she also has an alphabet section where she can practice using letters and forming words. 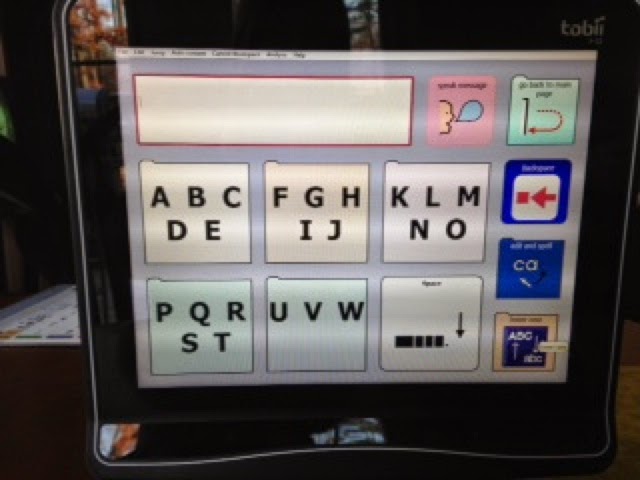 And this is what each section looks like when it is opened: 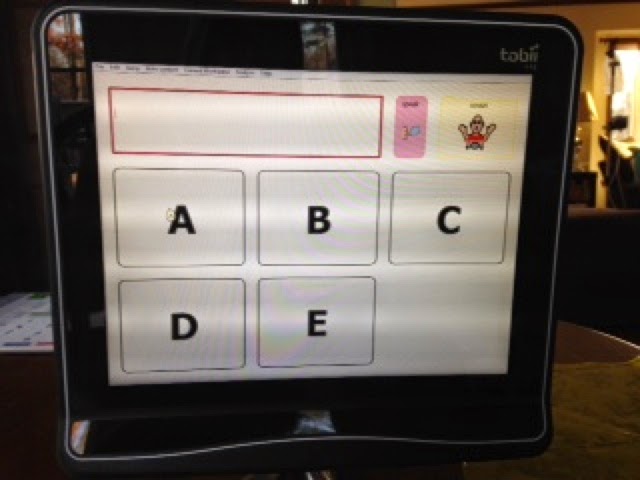 Here is a picture of what Lucy wrote the first time she gave it a try, and then she illustrated it by choosing items to make a 3D collage: 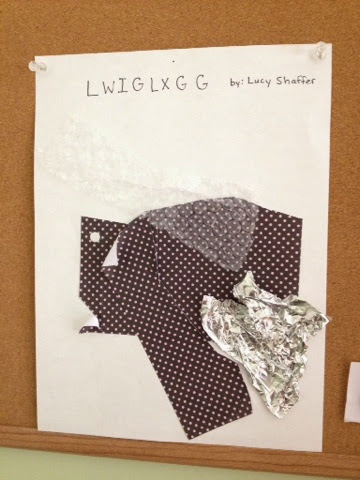 This is her writing from another time: 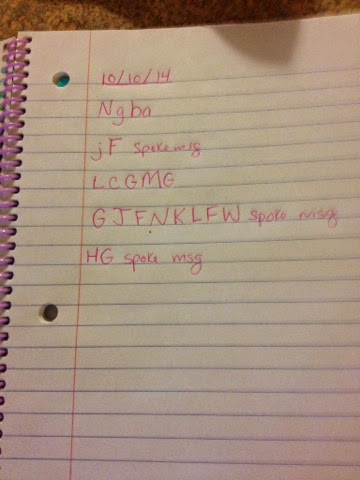 And a few weeks ago we used her alphabet to make a birthday card for her sweet friend, Mason. 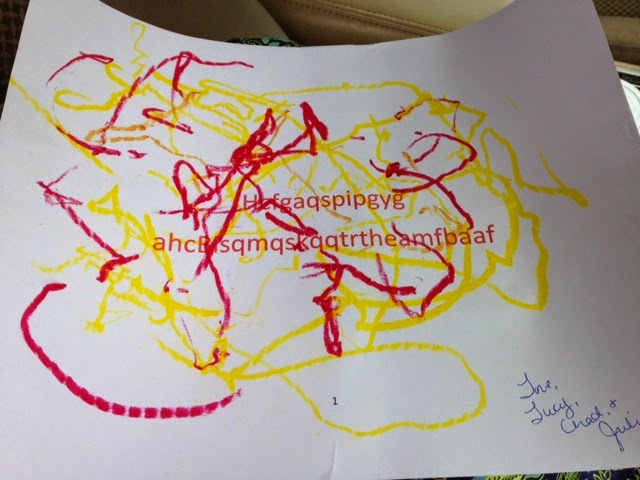 This time I asked Lu to help me spell Happy Birthday. In the word happy she correctly found the H and the P! And in birthday she found the B and I believe the R, but I can't find the paper where I originally was dictating her letters.

So, obviously Lu isn't "writing" "words" at this point, but what she is doing is exploring, experimenting, and learning. Children that can pick up a writing implement and grab a piece of paper will spend hours and hours of their life learning about letters. This is how Lu can do the same thing, just, as always, in a slightly different way. She won't adorably make backwards letters, or write her name gigantically across a page, but she will write her name. She will use letters. And what she will do someday is simply type out what she wants to say, and she will truly be an independent communicator.  When we are messing around with the alphabet, each time I remind her of how she will be able to do that someday and she will truly, truly be able to say absolutely anything she wants!

Here are a few great links to learn more about alternative pencils, as I am just learning myself!
http://www.med.unc.edu/ahs/clds/products/available-for-purchasehttp://fourblock.wikispaces.com/file/view/Alternate+Pencil+CD+-+Order+Form.pdf
Both of those links have products that can be purchased if someone chose to do so. I myself, if we didn't already have great alphabet tools, would just make my own. It's not rocket science, but not everyone's first thought is to just make their own of whatever is being discussed, but mine is. I just wanted to share the links for info, inspiration, and guidance.
So, let's get EVERYONE writing!

Check out my other blog about Lu and Rett Syndrome!